If you have ever visited Walt Disney World, you have likely seen the red gabled roofs of the Victorian-inspired Grand Floridian hotel, arguably the most luxurious and elegant of all on-property resorts. The resort was built in 1988, exactly 100 years after one of its main inspirations, the Hotel del Coronado which is located just across the bay from San Diego.  When the Hotel del Coronado (also known as "the Del") opened, it was the single largest resort in the world and is still the second largest wooden structure in the United States, second only to the Tillamook Air Museum in Oregon. 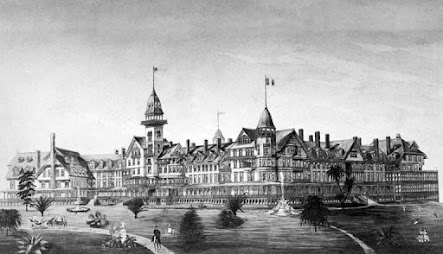 When the idea of the Del was beginning to form, San Diego was starting to undergo a transformation.  With a population of only 2,637 in 1880, by 1887, the area had grown to over 35,000 people. Often, during this time, developers would build grand hotels to draw people to undeveloped land.  Elisha Babcock and Hampton Story were no exception.  In 1885 they, and a group of investors, bought a 4,000 acre island and began planning the town of Coronado, a resort community intended to service their piece de resistance, the Hotel del Coronado.  They used the sale of land lots to help fund the project, and when construction began in 1886, nearly 2,000 laborers were working on the hotel full-time.
Just as the hotel was nearing completion, the California land boom collapsed, and Babcock and Story found themselves in need of additional funds.  They turned to Charles T. Hinde and John D. Spreckels, who loaned them $100,000 to finish the hotel.  By 1890, Spreckels had bought out Babcock and Story, and his family retained ownership until 1948.
When the Del opened in February 1888, over 1400 people boarded a ferry to travel to the island for the grand opening.  Guests were impressed with the hotel's amenities which, for the time, included such advancements as electricity, a state of the art sprinkler system, a phone system, and a steam-powered hydraulic elevator.  Rooms started at $2.50 per night.  In 1911, a chandelier designed by L. Frank Baum of "Wizard of Oz' fame was installed in the Crown Room, a location that was also a masterpiece in it's own right. Not a single nail was used in the ceiling - it was installed using only pegs and glue.  In 1904, the hotel debuted the world's first outdoor lit Christmas tree. 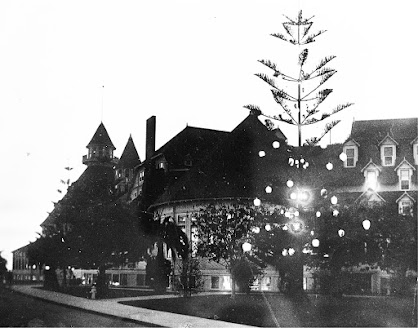 Over the years, the Del has hosted many well-known figures including celebrities, royalty and US Presidents.  In 1920, a grand event was held in the Crown Room to honor Edward, Prince of Wales, and many speculate that this event is where he met his future wife Wallis Spencer.  In the 1920s and 1930s, the hotel became known as "Hollywood's Playground" because many celebrities would travel south to party during the Prohibition.  Over the years, such notable guests as Thomas Edison, Charlie Chaplin, Clark Gable, Mae West, Joan Crawford, Katharine Hepburn, Bette Davis, George Harrison, Barbra Streisand, Brad Pitt and Oprah Winfrey have frequented the hotel. The Del also seems to have a permanent guest. Kate Morgan checked in on November 24, 1892 and was found dead on the steps leading to the beach three days later.  Her death was declared a suicide, and her story became the inspiration for a Stephen King short story.  Presidents from Benjamin Harrison to Barack Obama have also stayed at the Del, and the hotel has been the backdrop for films such as "Some Like It Hot', starring Marilyn Monroe. 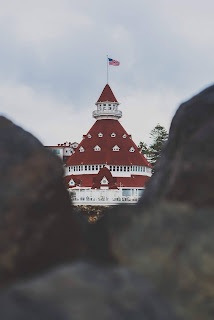 During World War II, the Del became the hub of Naval activities and housed pilots and other military personnel. What was unusual during this time is that the hotel, unlike many others along the West coast, continued to accommodate civilian guests. After the War, the hotel began showing signs of age, and in 1960, a local millionaire purchased the hotel and spent $2M in renovations. He sold the Del in 1963 to M. Larry Lawrence who planned to demolish the historic hotel and develop the land around it but instead invested $150M to renovate and expand the property.  In 1977, the Hotel del Coronado was declared a National Historic Landmark. Since Lawrence, the hotel has had many different owners and today, Hilton manages the iconic hotel.  Currently undergoing a $200M renovation, the hotel closed to the public for the first time in its history in March 2020 for 90 days due to COVID-19 concerns.  Construction has continued, however, and the multi-year "re-imagination" is scheduled for completion in 2022.
at October 26, 2020 No comments:

The History Behind the Luxury: A Series About the Finest Historic Hotels in the World

The History Behind the Luxury, Part 1
The Waldorf-Astoria and St. Regis

Fans of the movie Titanic may remember John Jacob Astor IV.  He's the New York millionaire sailing with his "little wifey", only 18 and pregnant and part of quite a scandal. Astor was unquestionably the most wealthy of the Titanic's passengers, and he did, indeed, go down with the ship.  His wife, Madeline, survived and gave birth to their son, known as Jakey, four months after the sinking. Before the tragedy of the Titanic, however, Astor used his fortune to build the Astoria hotel in New York in 1897.  You may be more familiar with the name Waldorf-Astoria, and that has a family connection as well.  In 1893, William Waldorf Astor (John Jacob's cousin) built the Waldorf on the corner of Fifth Avenue and 33rd Street in New York City, and it's said he did so partly to spite his cousin.  In retaliation, John Jacob built the Astoria on an adjacent corner four years later, but it wasn't long before the cousins realized that joining both hotels would be a smart business decision, so they connected the Waldorf and Astoria with a marble walkway, and the Waldorf-Astoria was born.  The original hotel was demolished in 1928 to make room for the Empire State Building, and the new Waldorf-Astoria was built farther uptown in 1931. 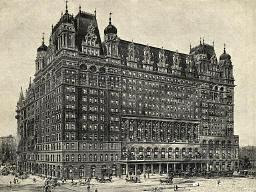 In 2014, Blackstone Group sold the Waldorf-Astoria to Anbang, a Chinese investment group for close to $2 billion. In 2017, the Waldorf-Astoria closed to the public in order to undergo an extensive renovation.  Set to reopen in 2022 and 2023, the newly imagined complex will boast 375 condominium residences and 375 hotel rooms. Studio residences will start at $1.7 million and amenities include a 25-meter pool with skylights above, wellness lounges, landscaped terraces, a movie theater, game room and a co-working lounge. Although Hilton no longer owns the property, the company agreed to manage the Waldorf-Astoria for 100 years. 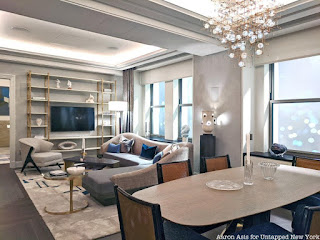 Although the Astor family started making some money as fur traders, their true fortune came from real estate investments.  One of the original John Jacob Astor's first big purchases was a large area of land in the middle of Manhattan - today we know it as Times Square. John Jacob Astor IV continued his family's tradition and, having enjoyed success with the Astoria hotel, opened the St. Regis in 1904.  The New York Times called it the "finest hotel in America" upon its opening, and Astor wanted to provide a memorable experience, placing a telephone in each room.  Considering that in the 1890's there were less than three telephones per thousand people in the US, having a private phone in each room set the standard for luxury. The St. Regis NYC still stands today and is owned by Marriott International.  In 1991, the hotel became the flagship for a line of luxury hotels that were part of Sheraton known as the ITT Sheraton Luxury Collection.  When Marriott acquired Starwood hotels in 2016 (which acquired Sheraton in 1998), they gained the St. Regis brand.  Interestingly, the St. Regis name cannot be used in lower British Columbia because the name is legally owned by the independent St. Regis Hotel in Vancouver which was built in 1913, a year after John Jacob Astor perished on the Titanic. As of 2020, there are 46 St. Regis properties in such diverse places as Atlanta, Bora Bora, Istanbul and the Maldives. Continuing in the St. Regis traditions, Marriott states "All hotels within the St. Regis portfolio draw from the vision of our founder, John Jacob Astor IV, to create a sense of home in a foreign place.  Designed to feel like a luxury residence, St. Regis calls upon a commitment to its longstanding heritage to cultivate the "best address", and invite guests to a world long lauded as the place to see and be seen." 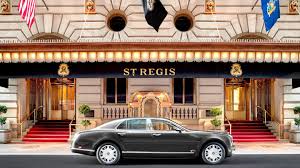 Interested in booking one of these unforgettable properties? www.bigcreektravel.com

The History Behind the Luxury, Part 2 Hotel del Coronado, San Diego If you have ever visited Walt Disney World, you have likely seen the red...